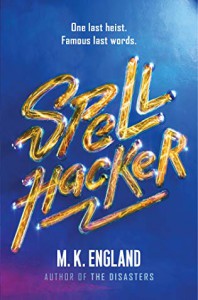 This is such a fun book. Magic meets technology and perfect pacing as Diz and friends find themselves on the run after what was supposed to be one last, easy heist. When the story starts there's clearly the start of a rift happening between the friends as everyone but Diz plans to leave the city Kyrkarta in search of a better life, and Diz feels completely abandoned.

Diz was such a flawed and complex character, clearly torn between extreme anxiety of wanting anyone to be close to her, but wanting human connection too. I shipped Diz and Remi heavily, their relationship was more realistic than I would normally see in a YA book. It's a hard task to pin down the genre of this book, but I would choose Dystopia, due to the realistic/futuristic setting and controlling Government.

The plot, admittedly, gets fairly basic and is predictable. The way magic (Maz) is used felt completely new to me and I loved the idea of teenage hackers, syphoning Maz and selling it on so they can afford their future plans. There was big reveals that were completely unsurprising unfortunately. The diverse characters, their relationships and their problems made this story well worth reading. There's even a non binary character, the first time I've seen myself represented in a book.

I did feel that the ending was left wide open for a sequel, so hopefully that will be announced by the end of the 2020. I felt connected to this family and I want to see what they get up to next, hopefully changing the entire world and taking down the evil MMC Corporation. I should rate this a 4 because of plot predictability but I have such a soft spot for this book it's getting a full 5 and going on my Best Of 2020 list.