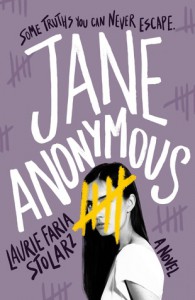 I actively seek about books about people trapped in unusual places and how they get out and move on with their life, and I'm not sure what that says about my own past lives. I'm so happy to add Jane Anonymous to my strange collection, it was everything I wanted it to be, giving us the full story and leaving on a high note, no questions left unanswered. Well, I wanted to know if she adopted the dog, Brave.

I found the Now chapters harder than the Then chapters, because I hated Jane's mother so, so much. There wasn't a single moment where I felt she was thinking anything but herself and her own feelings, with a complete disregard for Jane's. There were times were Jane would be having a panic attack, needing to leave and her mother would just bark, 'No. Sit.' at Jane, as if Jane was a dog. It was very difficult to read.

There were parts I guessed quite easily and parts that I didn't guess at all - and if there's anything I don't guess I'm generally very happy with a book, because I've been known to guess full plots after reading blurbs before now. I really like that the story is told as if Jane is sitting down, writing her thoughts for us to read. It felt more personal.

I left the book on a high note, but with so many thoughts and feelings. I loved that the ending didn't leave me wondering what would happen next, which is a trend in YA books that I hated. I also loved that the story didn't paint a huge picture of the kidnapper, it was all focussed on Jane, the only important one in the story.